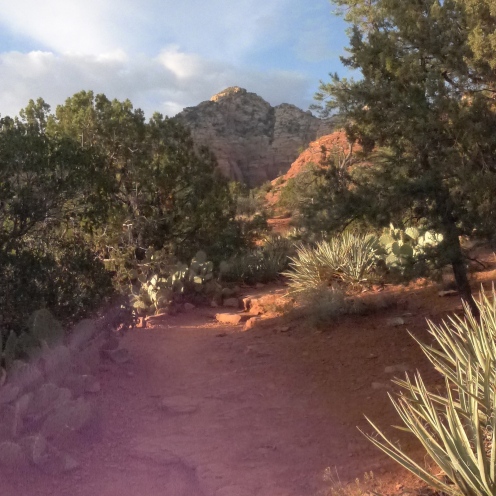 Sometimes my life feels like an episode of The Twilight Zone. Twice in the last 4 months my digital camera has picked up a pink streak on the path in front of me. It happened first in Avebury and then this week in Sedona.The first pink flash was a little freaky. It felt like I had captured a spiritual presence. But when it happened again, I started to think it must be the camera. So I checked online about pink streaks in digital images and found that ‘digital blooms’ can appear on sunny days if you shoot into the sun, because the camera is registering intense light. But my images were both taken in low light conditions.

Both days were magical for me. I felt such calm and peace in Avebury, the heart chakra of the world. And this week walking the Sugar Loaf Trail at dusk, I released a huge amount of tears and stored grief as I watched the spectacular sunset over Chimney rock.  I felt like I was saying goodbye to Laura all over again. Her beauty flaring out and passing with the light. After puzzling over what the pink streak could possibly be and finding no solution, I woke one morning just before dawn and there in the corner of the room was a beautiful pink column of light. I smiled, felt a burst of relief and fell back asleep.