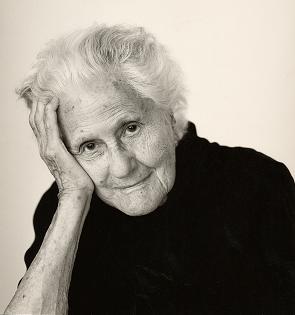 My dear friend Eva Zeisel, who died age 105, nearly didn’t make it past her 30s. She was arrested in Russia in 1936 on suspicion of plotting to kill Stalin and thrown into prison for several years (including 1 year in solitary confinement). While Eva’s fellow inmates went mad or committed suicide, she survived by honing an extraordinary Zen-like calm.  She trained herself not to think of her sweet life in the past or daydream about the future, either would drive her mad. Instead she lived only in the now and occupied herself with tasks like cycling in the air for exercise, mentally figuring out how to improve the design of her bra and writing poems; for paper she used the labels pulled off canned food sent by her mother and for a pen she used a feather plucked from a bird on her window sill, dipped in dirt on the floor.

I met Eva in her 90s and she still lived firmly in the now. She would drop anything for a fun adventure. Her daughter Jean told me ‘If I said to her let’s go to Morrocco tomorrow, she would have her bags packed.’ She worked day, night, weekends creating beautiful ceramic designs – it was all play to her.  Whenever I called to chat, she insisted I come to dinner that night.  If you tried to make a plan for the future, she would say grumpily, ‘Well call me when you have time!’ The only thing that mattered was the now.  It was infectiously wonderful to be around her joyful enthusiasm for living.  I so wish I could live like that, especially now.  But it is so hard when my heart strings keep tugging me towards the past.