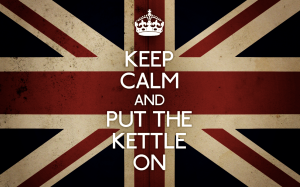 I flew into the UK yesterday into the arms of a truly British welcome; a mixture of kindness, quirkiness and comedy.  I was greeted at Heathrow airport by a pair of stripy men’s underpants whizzing around on the luggage carousel closely followed by 3 pairs of socks and a bag of peanuts.  After running to catch the last coach to arrive before midnight in Cambridge (where my parents and sister’s family live), I realized I would be taking the 3 hour trip without any sustenance. The kindly bus driver (the first of three) said he would wait while I dashed out to grab a cuppa. An hour later, the second driver lost the plot while taking a detour and had to ask ‘anyone with a mobile phone’ to google our whereabouts (evidently no radio or GPS on board).  But my very favorite moment was when the third driver, (a woman of about my own age), upon hearing that my 87-year-old dad was waiting in his car for me in Cambridge,  jumped off the bus, hoiked out my two big suitcases, walked them across the car park and put them in the trunk of my dad’s car, then waived us goodbye.  Hello Britain.  It is good to be back. And guess what?  I think Laura has come with me.