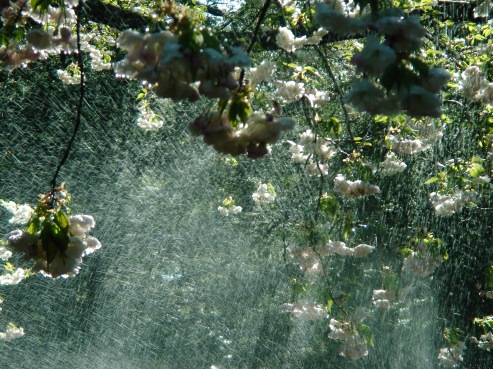 A little snow and the first sprinkle of Spring flowers this week in Central Park; hellebores, forsythia, magnolias, daffodils and a froth of apple blossom.  I love the arrival of spring.  I can usually tell when it is about to happen because one little tree on the Great Lawn in Central Park is always the last to drop its leaves in autumn and the first to show new shoots in Spring.  When its tips turn red, spring flowers are just days away.

This sudden abundance made me think of a talk I heard recently from birth doula and hospice worker Jeanne Denney at the Open Center. She said that whereas plants and trees grow from the ground up,  we humans grow from the head down. A newborn baby is like a tadpole, with a huge head and a fairly tiny body. As we mature, our bodies elongate and fill out. Some parts, like the bones in our hands, take until our mid 20s to fully knit together. And when we die our lower extremities usually fail first. In other words, we die from the feet up; whereas plants typically die from the top down.

There was a beautiful poetry to her theory.  I think she was saying in effect that our spirit is blown into our head at birth and that it escapes through our head at the end.  She explained that the classic Cheyne-Stokes breathing, which accompanies our last hours, although it sounds so labored and erratic, is a form of pushing very like the labor breathing at birth. Her theory is that the Cheyne-Stokes breathing functions like a trampoline pushing the spirit out of the body back into eternal consciousness. She had us all assume the posture that the dying commonly take of being curled forward, chin jutting forward and out. It looks awfully contorted and uncomfortable, but to my great surprise I found it very soothing and relaxing. Her theory is that we instinctively know what to do at birth and death and that they are really the same process in reverse.  Like a tree bursting into life in spring and retreating from the outside world in autumn. And like the trees and plants, there is no beginning or end to the cycle of renewal.  Even though we cannot see it, our spirit is constantly flowing in and out of being.